An artist explores the stunning landscapes of Iceland, Greenland, and Canada aboard the Seabourn Quest.

An echoing boom distracted me from the painting in my hands as I looked up at the sea of ice in front of me. An orchestra of pops, squeaks, and groans arose from the massive blocks of ice and gave the Ilulissat icefjord a larger-than-life presence.

I was miles north of the Arctic Circle in Greenland and perched atop a dome of rock above the largest icefjord in the world. The giant icebergs filled the skyline with a mosaic of ice that obscured my view of the gleaming Seabourn Quest, my home during our arctic journey. I saturated my paintbrush with a mixture of water and vodka to keep the paints from freezing and mixed a deep blue color mimicking the shadow cast by one of the icy giants. On my page, the shades of indigo and cerulean quickly delineated layers of ice and the painting became a definitive record of what I experienced in a region I’d dreamed of visiting for 10 years.

As a guest artist and lecturer with the Seabourn Conversations program, I used each painting and sketch as inspiration for discussions with my fellow guests.

A few hours before creating the painting I stood on the deck of the ship to witness what our captain described as one of the most beautiful approaches to land in the world. And he was right: With each passing hour, the white forms on the horizon transformed into enormous icebergs illuminated by the seemingly everlasting golden arctic light. We were sailing into Disko Bay, the incredibly remote gateway to the town of Ilulissat and a UNESCO World Heritage Site. The bay was a maze of ice that had traveled 67 kilometers (41 miles) down a fjord from the massive Jakobshavn glacier. This glacier recently set the world record for speed as it retreated and dumped ice into the sea, which prevented other less nimble ships from entering the bay. We were the first cruise ship to navigate the ice thanks to our captain and two local expert ice pilots that came aboard the night before.

I boarded the Seabourn Quest a week and a half earlier in Iceland at the start of the Route of the Vikings II cruise. Iceland was a place of volcanic rock contrasted with impossibly green mosses, unexpected waterfalls, and gleaming glaciers that I at first mistook for clouds on the horizon. The rugged and stark beauty of the landscape seemed a fitting place to get an initial glimpse of the Seabourn Quest. Moored at the deep-water dock, it was by far the most beautiful ship I had ever seen. Defined by a clean symmetry of curves, the vessel felt like it belonged in the landscape with the mountains reflected in windows and gleaming white paint the same color as the arctic birds skimming above the waves. And nothing prepared me for my first steps aboard. Welcomed with genuine smiles and a bottle of Champagne, I walked in awe up a glass spiral staircase at the center of the ship. Every surface glowed in the Icelandic light filtering through huge windows, and my artist’s eye was drawn to the little details of stone and metal. Like a painting, I could tell that every inch of the ship was designed with intention.

This was my first cruise, and many days I relished waking up early to walk the different decks of the ship while sipping dark chocolate hot cocoa. I was amazed to realize that within a day of boarding every member of the crew knew my name, and every evening a gentleman in a suit walked me to my dining table where I enjoyed spectacular three-course meals shared with my fellow guests.

A few days after departing Iceland we made landfall in Greenland, a country I dreamed of visiting since I painted beside a glacier for the first time nearly a decade ago. I was accompanied on this adventure by my mother, who was my guest and fulfilling a lifelong dream of going on a cruise. With the ease that only a ship can give, we woke up in a new port every day and spent hours exploring ashore. We quickly developed a routine of wandering the town and making quick sketches and notes before hiking to the highest point so I could paint the view. We walked by multi-colored houses and over faint trails until the Seabourn Quest was a small shining form on the sea below.

As we made our way up the coast of Greenland the brown and green pigments of my southern paintings shifted to deep indigo blues and the aquamarines of icebergs floating in arctic seas. I donned favorite dresses for formal nights and looked forward to every dinner where I knew the conversation would be lively and full of laughter. I slowly learned the names of crew members who knew what I would order before I did. I gave lectures to groups of fellow passengers about everything from local art to my experiences as an adventure artist, and showed photos of paintings and details I noticed in each place we visited. During our days at sea I painted in the public areas of the ship and invited my fellow guests into the painting process through observation of the landscapes together.

Our tour of Greenland was a mosaic of arctic beauty capped with seeing the Northern Lights when we sailed from Greenland to Canada. One of my favorite memories is standing outside the Sky Bar on the tenth deck in pajamas and a huge puffy jacket marveling at the bands of cream-colored light wavering across the entire sky. We called our shipboard friends at 2am and stayed outside watching the sky as long as we could in the provided (and coveted) fluffy bathrobes under our coats.

During the crossing we watched polar bears wander barren beaches through binoculars and saw seabirds fly above our wake. Our first port was made special by the dozens of locals who brought instruments and serenaded the ship’s arrival with live rock music… at 7am. I danced on the deck and watched the crew maneuver our ship with incredible precision to the dock.
Every port in Canada had a completely different feeling. At one remote outpost we visited the ruins of a Viking town and met the brother and sister whose job was to live in the recreated Viking longhouse. We donned old dresses and posed with old axes before hiking far above town. A few days later I was eating French toast when a whale beached right off the stern of the ship followed by a pod of porpoises.

Our cruise ended in Montreal, and I was sad to leave the friends I made over the last month. In our cabin my stack of paintings was now a thick bundle with a layer or two from every day aboard the ship. In every one of them, I see one of the many unforgettable moments from my adventure. 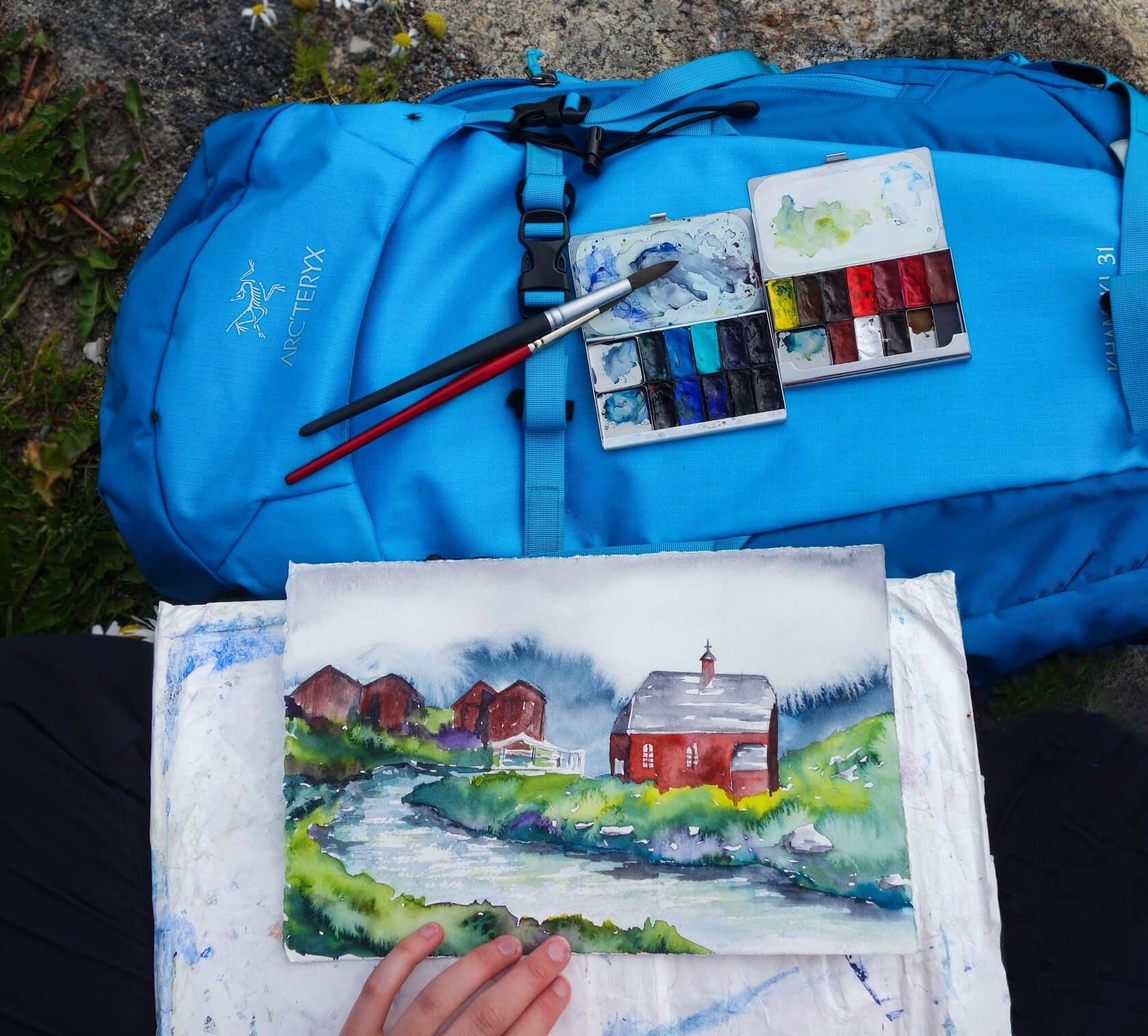 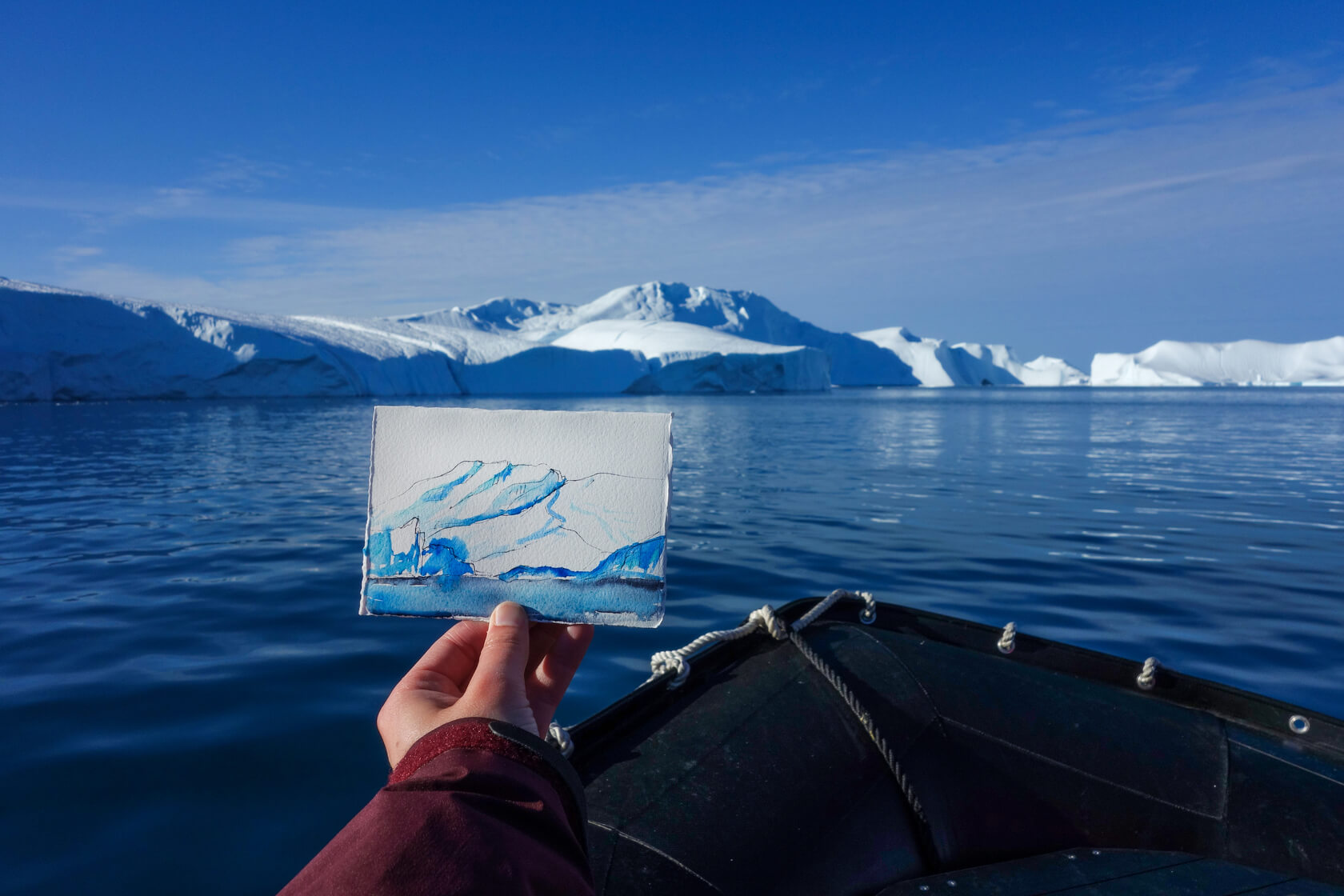 When should you travel to this majestic, unspoiled country? The answer depends on your intended adventure.

Everything You Need to Know about Hákarl, Iceland's Fermented Shark Delicacy

Here’s something to get your own jaws around...or not.

The whys, whats, and hows of the everyone’s food obsession.