I pass by an apartment doorway with a dazzling display of handmade painted tiles in blue and yellow swirling designs, centered by an image of golden Spanish galleons. Tile panels flank the doorway of the 18th-century Capilla de los Marineros, a sailors’ chapel in Seville’s spirited Triana barrio, featuring images of the Virgin Mary and Christ bearing the cross. Outside Triana’s bustling marketplace, yet another set of tiles portrays vendors on donkeys selling pottery jugs, fresh vegetables and eggs in a typical market scene.

Walk along any city street in Seville and you’ll soon realize the colorful glazed ceramic tiles called azulejos seem to be everywhere. They’re within courtyards, on storefronts and building facades. They’re emblazoned on church walls and along the hallways of medieval stone palaces. Images vary, ranging from colorful caricatures of everyday residents to monarchs, saints and noblemen in what look like vivid oil paintings. And many feature geometric designs — simple, yet intricate at the same time.

Azulejos are an important part of Spanish and Portuguese cultures that have spread throughout the Iberian Peninsula and beyond — seen, for example, on the elaborately tiled benches of Plaza 25 de Julio in the Canary Islands’ Santa Cruz de Tenerife, or as trim within Catalan architect Antoni Gaudí’s ceramic mosaic patterns on the crooked pillars and curving benches of Barcelona’s popular Parc Güell. Segovia’s fairytale-like Alcázar has simple tiles in its Hall of Kings and other chambers, while Toledo’s Museo del Greco — the Museum of El Greco — also houses tile artworks along with masterpieces by the famous Greek painter.

Stemming from Moorish traditions, azulejo is rooted from the Arabic word az-zulayj, meaning “little stone” or “polished stone.” In fact, the Moors painted their tiles in Arab-influenced zellige style, using elaborate geometric patterns to conform to the Islamic tradition of designs devoid of human figures. Starting with Moorish dominance in Andalusia in the 8th century, such tiles and intricate calligraphy plasterwork still line the walls and ceilings of Andalusia’s palaces and mosques built in Mudéjar architectural style, including Seville’s colossal Real Alcázar and Granada’s mighty hilltop Alhambra.

After the Spanish drove out the last of the Moors in 1492, azulejo designs kept their Islamic geometric patterns, but also started to include Christian-influenced, Renaissancebased figurative scenes — saints, biblical stories and mythology. By the end of the 16th century, craftsmen were designing such images spanning many tiles that would come together as wallsized decorations, particularly for large surfaces in churches and monasteries.

“It has an Islamic legacy, but we consider azulejos as our own tradition by keeping it alive,” explains tour guide Raúl Flores. “It’s more than decoration because there’s an industry here.”

Seville and its Triana neighborhood became one of the most prominent azulejo manufacturing centers in Spain. Since medieval times, Triana seemed worlds away from Seville, although just across the Guadalquivir River. Steeped in its working-class roots, the barrio’s CRACKING. character was shaped over the years by its resident sailors, fishermen, blacksmiths, artisans, singers, flamenco dancers and ceramic craftsmen who forged a community identity that local trianeros remain proud of today.

“If you walk down a Triana street, it’s like being in a little village in a big city. It has a special atmosphere, a special essence,” asserts Flores. “The ‘real’ people used to live on the other side of the river — the royalty and nobility. Triana,instead, was a mixing of cultures.”

It’s no surprise that azulejo factories prospered, including the facility that today houses the Triana Ceramics Museum. Although production ceased in the late 20th century, the factory’s original firing kilns and warehouses remain. Outside, chipped and charred brick walls line the courtyard, while elaborate and colorful azulejo displays enliven the museum’s interior. One exhibit explains that more than 20 such factories fired up ceramics in Triana in the 1920s, but none remain active today.

Exhibits detail how the blue-tinted clay soils from the Guadalquivir’s riverbanks and more earthen-colored soils from the nearby Aljarafe region were blended together to produce a clay more resistant to cracking. Workers would knead the clay with their feet and hands, then shape pottery, tiles and other pieces before firing them for up to 15 hours. The ceramics were cooled down, varnished and painted, and often reheated to complete the process.

Colorful glazed tiles line the museum’s walls — a hawk with flapping wings, a peacock with its feathered tail amidst flowers, and birds doting on a fountain. Twentieth-century azulejo street signs and advertisements line another nearby wall, where my eye catches a bench top’s painted designs of young dancers frolicking in a meadow framed by intertwining blue, green and gold trim patterns.

Because Seville’s ceramic factories so recently mass-produced azulejos, such colorful images are now practically at every corner — along floors and patios, within kitchens and as decorations in homes and gardens. Businesses post them on their storefronts and at their entrances, some with dates and tributes to their founders. One local bar, for example, includes an image of a bottle of wine with protruding grape vines amidst twisting, decorative designs. Others detail popular Seville landmarks such as the 13th-century river watchtower Torre del Oro and the imposing Gothic and Baroque Giralda Bell Tower of Seville’s imposing cathedral, where the remains of Christopher Columbus lie entombed within a sarcophagus as elaborate as those for royalty.

Perhaps Seville’s most dazzling azulejo displays line the walls and towers of Plaza de España, a semicircular complex surrounded by a curving, multicolumned building within the urban forest of Parque de María Luisa. The neo-Mudéjar and neo-Renaissance architecture is trimmed with hundreds of glazed tiles — on the balustrades of bridges crossing a curving canal, on benches along the base, and on the cupolas of its many-columned towers. Azulejos there portray historic battles and maps of every Spanish province. Brightly colored tiles also decorate the park’s many fountains and pools. Construction began in 1914, and the plaza and park were deemed to be the centerpiece of the Iberoamerican Exposición of 1929.

Portugal’s azulejo heritage, meanwhile, is proudly showcased in Lisbon’s National Tile Museum, where an enormous centerpiece exhibit, the Grand Panorama of Lisbon, stretches along several wall sections. Painted around 1700, it’s a view along the Tagus River highlighting such details as the central domed palace with turrets and balconies, a sky filled with rounded clouds, a hilltop castle, and hundreds of buildings clustered alongside pointed church steeples.

As with Seville’s azulejos, Lisbon’s tiles are seemingly everywhere as well, decorating outside walls and the interiors of the most elaborate palaces, churches and monasteries, and embellishing home facades, squares, and even house number markers above doorways.

Thus it’s no wonder that azulejos make great souvenirs. Outside the Triana Ceramics Museum, I visit Ceramica Triana, one of Seville’s most popular tile and pottery stores just down the street from other such artisan shops.

Ceramics bursting with a cacophony of colors clutter store shelves — swirls and images on porcelain pottery, vases, individual and groups of tiles, coffee cups and tea sets, animal sculptures and bowls. Figurines of Spanish dancers in ruffled dresses are front and center in display windows. And there are ceramic house numbers, like those on many Andalusian houses, on sale to take home — a colorful way to spread the tradition of one of Andalusia’s most enduring art forms. 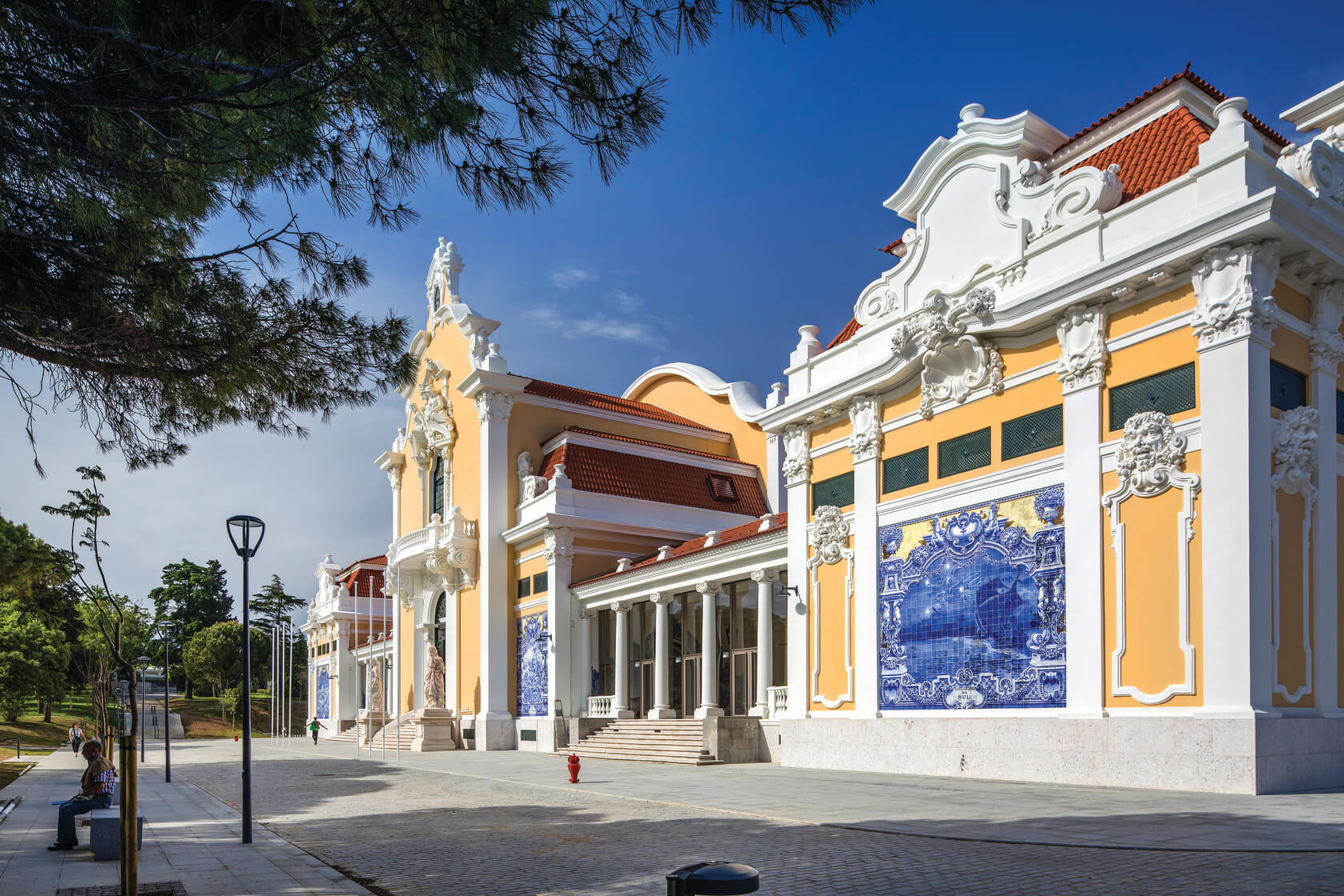 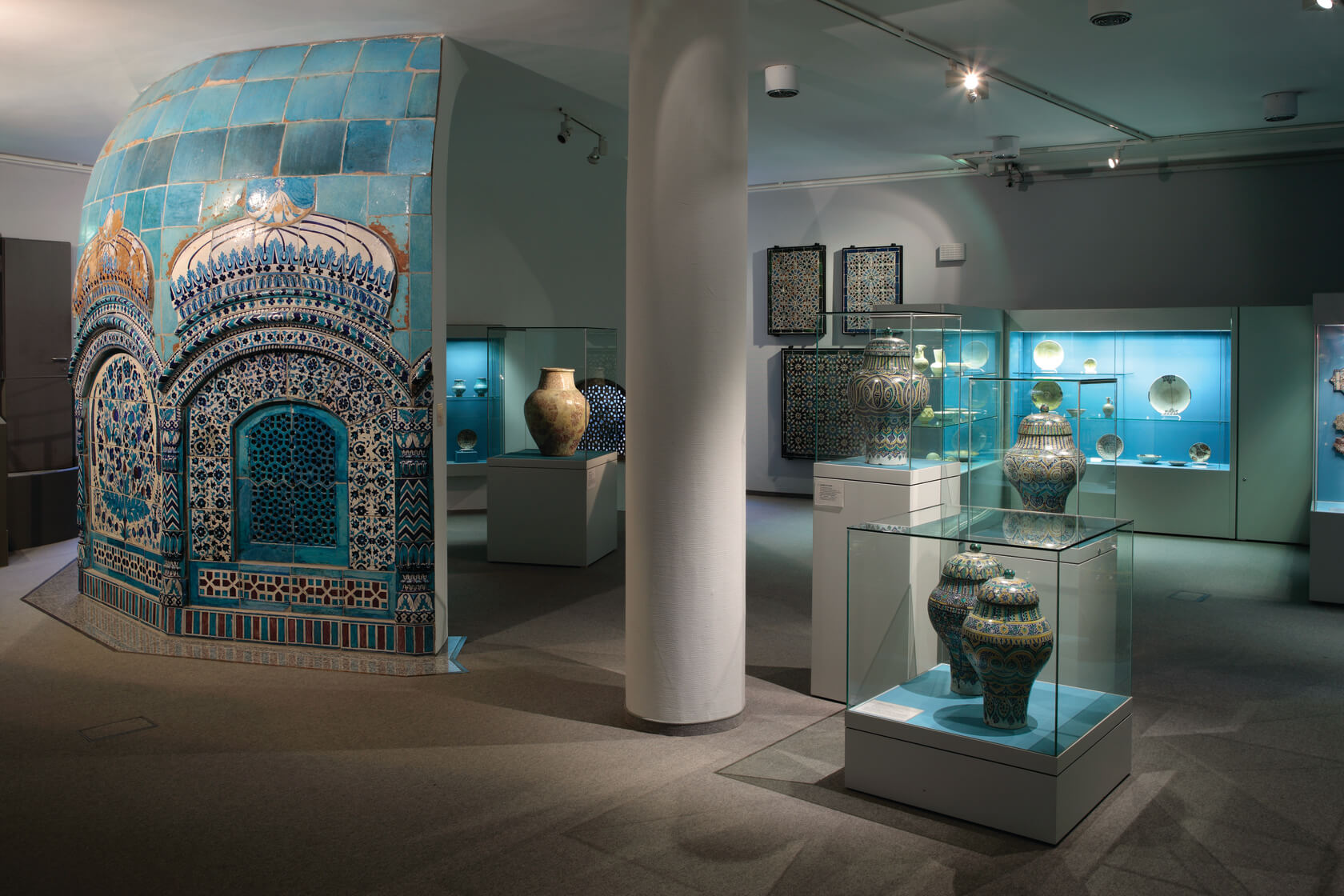 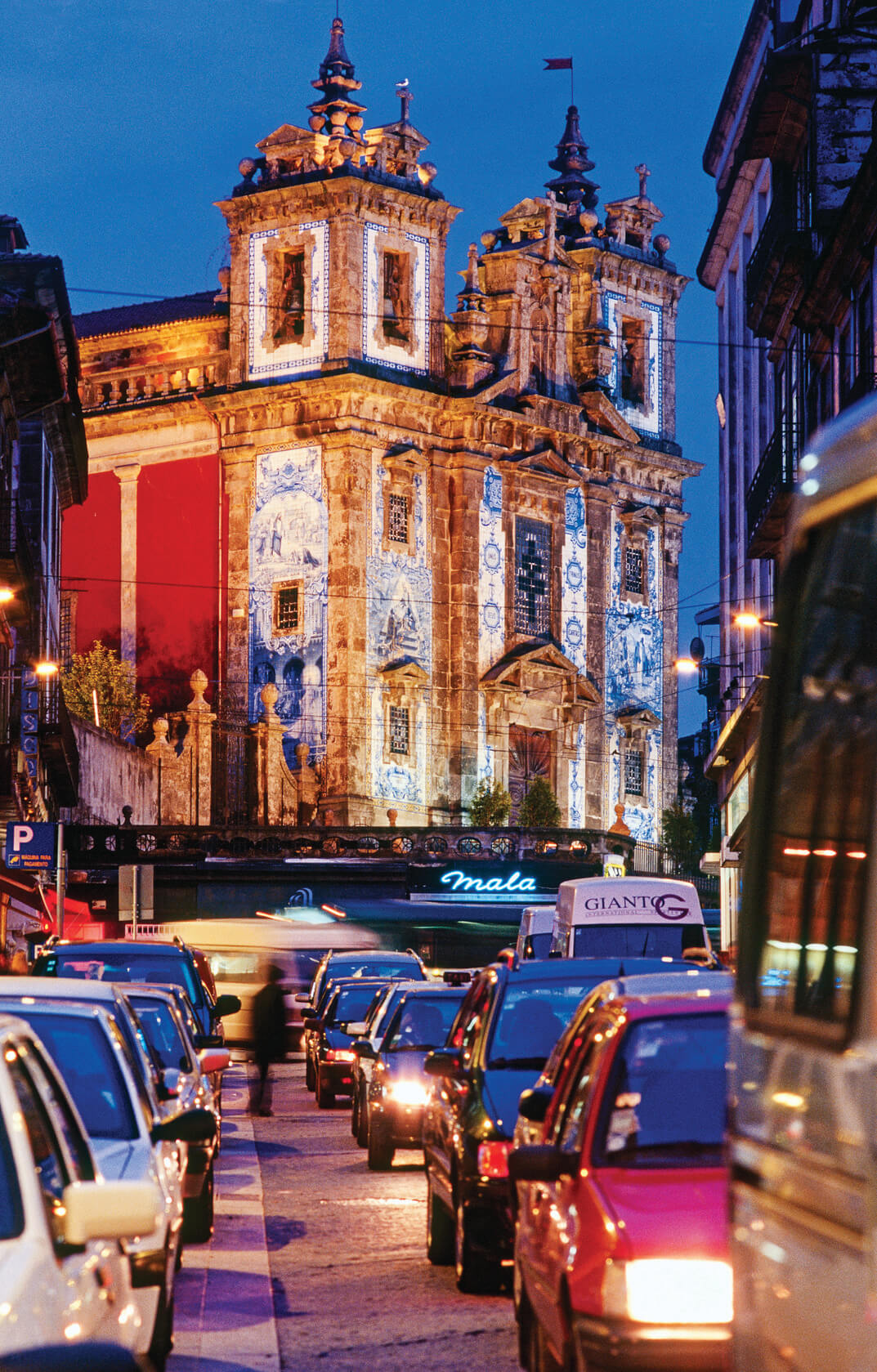 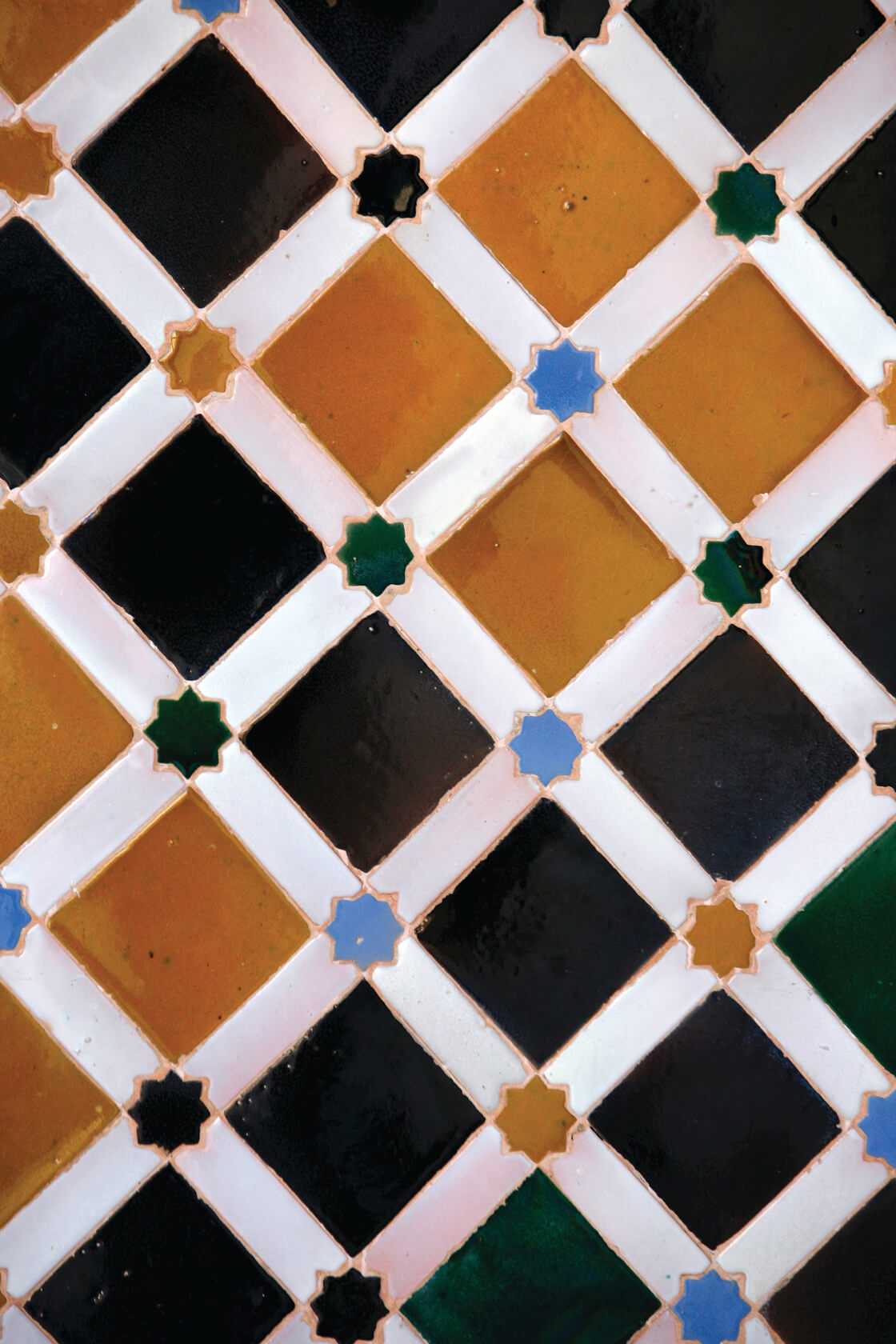 Tags:
Culture Things to do Mediterranean

Evenings on a Seabourn cruise offer a variety of entertainment to suit your every mood.