Travel to the bottom of the earth for the adventure of a lifetime.

The world south of Patagonia is a continuous montage of striking scenes: magnificent penguins waddling beneath snow-capped mountains; tabular glaciers calving into midnight blue sea; mammoth icebergs floating as far as the eye can wander (and beyond). While Antarctica itself promises countless once-in-a-lifetime sights, the journey there — along the picturesque coastline of Argentina, through the hilly archipelago of South Georgia, over the lively currents of Drake Passage — is not without its own bevy of photo-worthy moments. Below, we spotlight the top seven experiences to relish on your Seabourn sailing to Antarctica.

1. Behold over 250,000 king penguins
Located on the north coast of South Georgia, Salisbury Plain is most famous for drawing the second-largest penguin colony on the island. Packed with over 250,000 king penguins along its pebbly shores, the beach is a stunning spectacle of sight and sound (the trumpet calls of the adults, whistles of the chicks, and rhythmic crashing of the waves create an unforgettable natural symphony). Standing up to 3 feet (almost one meter0.3 meters) tall, with smooth, glistening down and bright golden plumage across its neck and throat, the king penguin is one of the most recognizable — and regal — penguin species (by contrast, its chicks have plain dark brown fur — hard to imagine they’re related!).

2. Pay respects to Sir Ernest Shackleton, the heroic explorer
The capital of South Georgia is Grytviken, an abandoned whaling station encircled by steep mountains. Once home to approximately 500 Norwegian whalers and their families, Grytviken is now an eerie ghost town best known for its memorial of Sir Ernest Shackleton, the famous Anglo-Irish explorer who died from a heart attack in 1922 while beginning his fourth Antarctic expedition. Standing before Shackleton’s pristine gravestone set against jagged cliffs and the bright-blue waters of King Edward Cove, it’s hard not to be moved — not only by his legacy, but the stunning view, too.

3. Cruise along the iconic Drake Passage
Stretching from the southernmost tip of South America to the South Shetland Islands, the legendary Drake Passage is the de facto gateway to Antarctica. At 620 miles (998 kilometers) wide — roughly the distance from London to Berlin — this expansive waterway is rife with awe-inspiring wildlife sightings, from frenetic Wilson's petrels to jumping dolphins and soaring albatrosses with wingspans up to 11 feet (3.4 meters). Marine activity is particularly high in the Antarctic Convergence, a circular boundary zone where cold, northerly Antarctic waters coincide with and sink beneath warmer subantarctic waters.

4. Visit Deception Island
Nestled in the South Shetland Islands just north of the Antarctic Peninsula, Deception Island is a collapsed — but still active – volcano with a sea-filled caldera at its center. Encircled by tall glaciers and mountains, the caldera looks like any other island from the outside, but once you sail through the narrow entrance, the ash-streaked volcanic rock, black-sand beaches, and natural hot springs will take your breath away. First discovered by British sealers in 1820, this small, horseshoe-shaped island was a prominent whaling spot throughout the 19th century; today, its primary residents are a massive colony of chinstrap penguins and 18 different species of lichens and mosses that have not been recorded anywhere else in Antarctica.

5. Admire the picture-perfect Lemaire Channel
Flowing between Booth Island and the southern Antarctic Peninsula, Lemaire Channel is an exceptionally photogenic pocket of tranquil water and floating icebergs known affectionately as the “Kodak Gap.” Hemmed in by towering glacial cliffs, the narrow channel is famous for a preponderance of orca, minke, and humpback whales and still, mirror-like water reflecting the grandiose landscape.

6. Listen to rumbling icebergs in Neko Harbor
A small cove located within Andvord Bay, Neko Harbor is flanked by one of the most active calving tidewater glaciers in Antarctica. While admiring the soaring ice walls and deep blue crevasses encircling the bay, you’ll hear the nearly constant booming of icebergs tumbling into the sea. Weddell seals are frequently spotted among the chunks of ice, while a colony of gentoo penguins treks between the shoreline and rocky slopes hedging the harbor.

7. Kayak along narrow waterways and soaring icebergs
There’s no better way to experience the marvels of Antarctica than by kayak. Navigating among breathtaking ice cathedrals and waterways too narrow for our ships, you can dip your fingers into the water, feel the fresh spray of gentle waves on your face, and witness penguins, seals, whales, and more, frolicking just feet away. Led by our expedition team of guides, our kayaking excursions uncover the quiet majesty of polar landscapes with breathtaking intimacy. 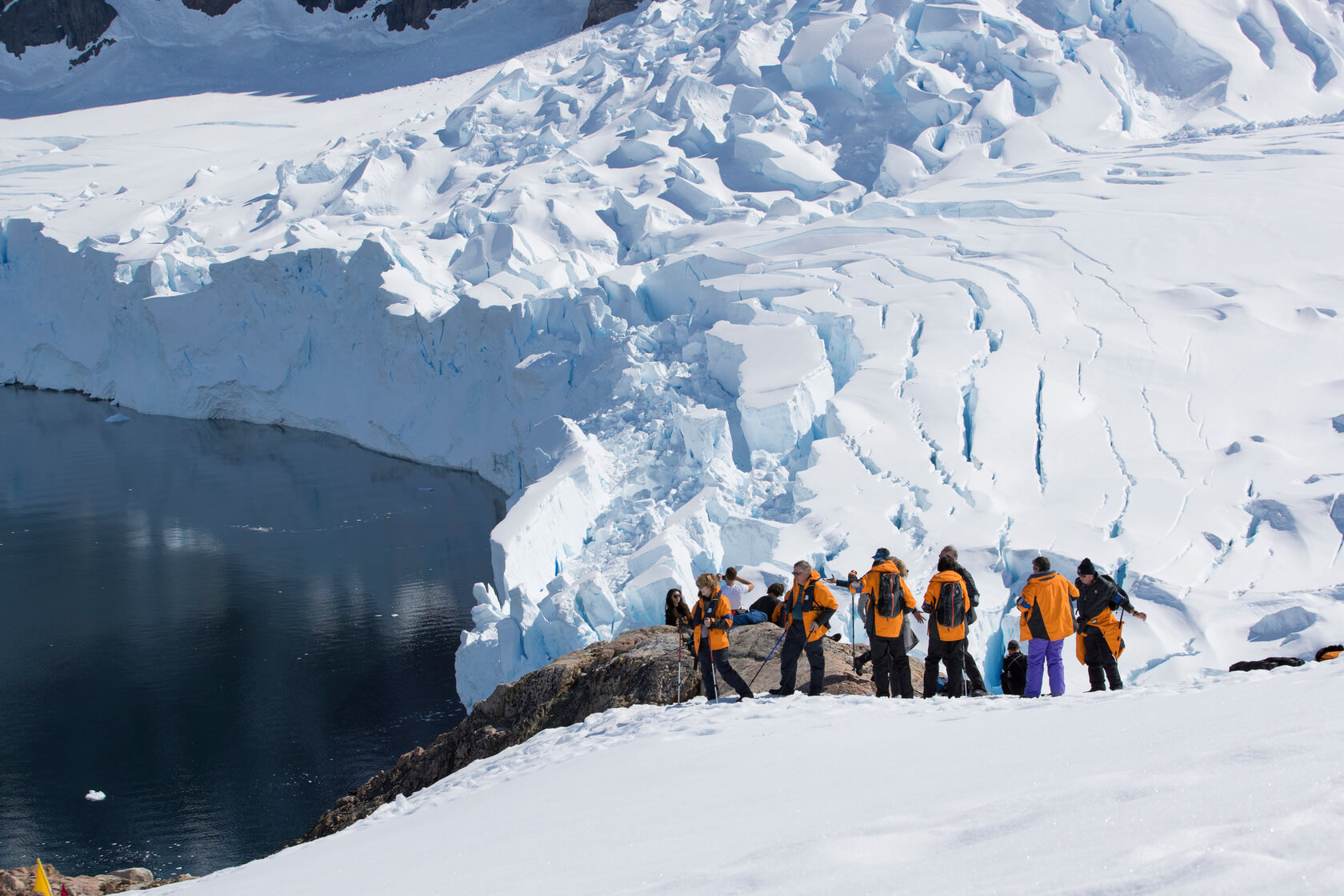 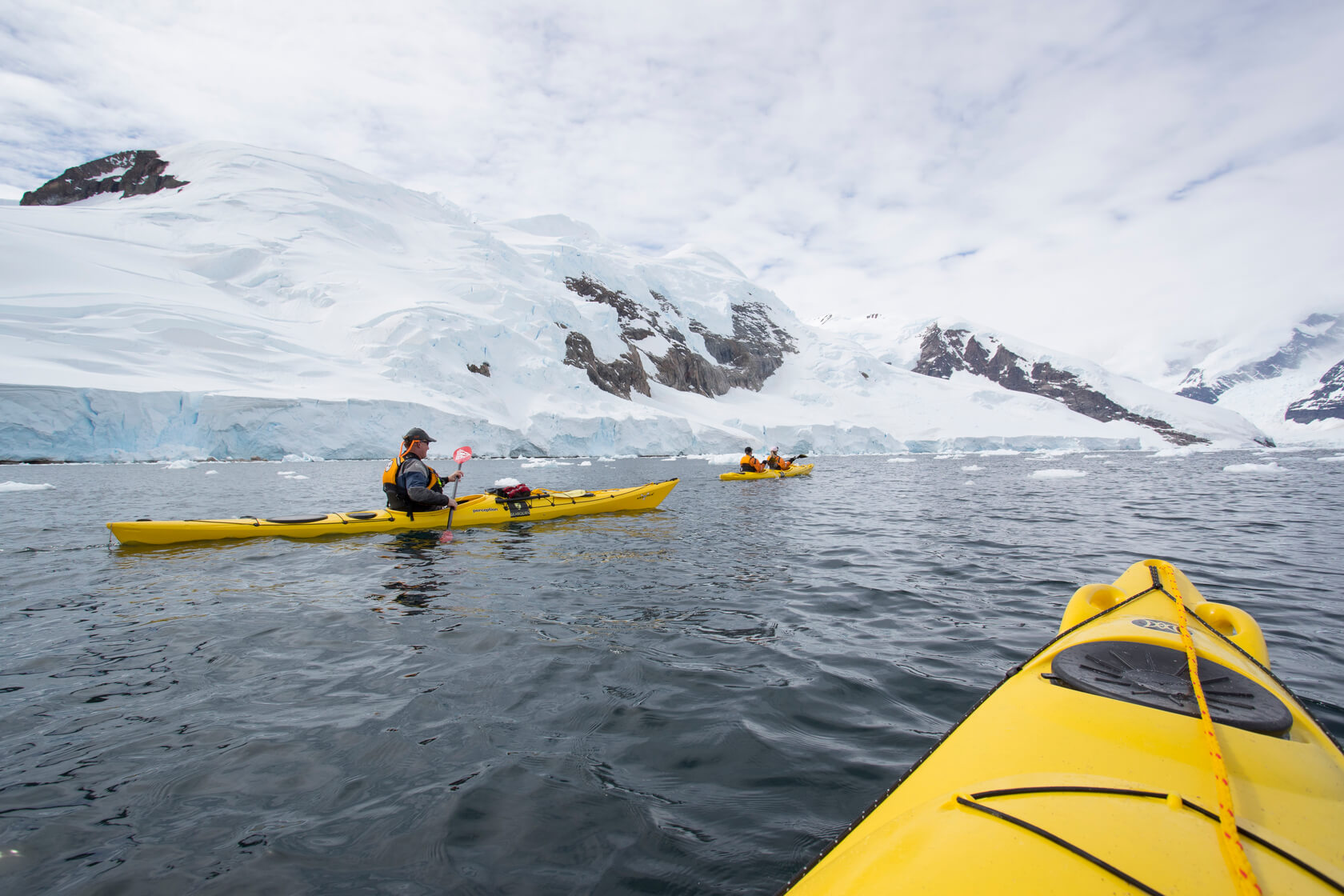 Things to do · Destinations · Antarctica & Patagonia

There are so many reasons to visit the land of the South Pole, and even more to visit on Seabourn Quest.

Adventure Awaits in Antarctica and Patagonia

Explore the Southern hemisphere with a world-class expedition team.

The 7 Best Places to Cruise

Sail to the southernmost reaches of the world to experience icy, otherworldly landscapes in Patagonia and Antarctica.